Just click the banner above to enter via Rafflecopter, or click the embedded raffle widget below. You can keep up with the raffle via Facebook also: https://www.facebook.com/events/361555663986618/

And I’ll be announcing and profiling the special guest author who has written up an introduction for the re-release in a couple days, so be sure to return for that.

Much thanks going out to Moncton’s Rize Magazine and Tammy Comeau for doing a great interview / article on myself and The Black Act: Witch Twins Saga. It looks wonderful, and you can check out this January issue and all its excellent content right here: http://www.joomag.com/magazine/the-rize-magazine-january-2014/0279677001384112358 And when you visit the site, be sure to browse through the magazine’s back issues, too.

Over the next few weeks, I’ll be revealing the cover for The Black Act: Witch Twins Saga – The Complete Serial Novel and I’ll announce the special guest author who is writing an intro for the novel’s re-release! So keep checking back for more updates.

Hope 2014 has been good to everyone so far, and a belated Happy New Year! 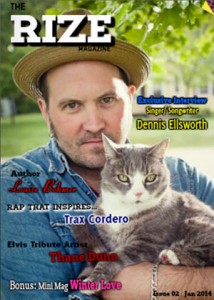 The conclusion to The Black Act: Witch Twins Saga is now available at Amazon, Nook, Kobo, and Smashwords. I’ll be releasing the complete serial novel this winter, with a very special guest author included. And, no, you don’t get to know who yet. I will continue to tease you! A companion book will follow soon after. Now, go grab the finale and see what happens to the witch twins and the wise women guild! 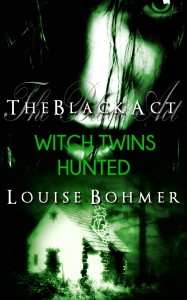 About: This is a serial fantasy novel that will be released in regular installments. Watch for The Black Act: Witch Twins Saga – The Complete Serial Novel coming soon, with an introduction from a special guest author.

In The Black Act Book 6: Witch Twins Hunted, the saga of the witch twins concludes with Claire’s daughter. War and plague rage through the valley, threatening the very existence of the wise women guild. Will Ella end the curse inherited from her mother, or will she bring the destruction her ancestral ghosts seek?

Excerpt: Had Rosalind not decided to return late that night after the Samhain ritual concluded, Claire was sure she would have died. She was thankful for the elder’s presence this morning, when she woke to weak autumn light peeping in through the bedroom window.

“Don’t move too much, child. You are quite bruised and scratched up.”

Rosalind’s voice comforted her. She was glad her second guild mother remained with her still. Claire winced, trying not to jerk upright from a sharp spasm that coursed through her lower abdomen when she laid a hand on her stomach.
Rosalind handed her some water.

She smiled at her. “You should go, mother. Should you not be in elder lands? You took your oath of eldership last night.”

Rosalind smoothed some hair back from Claire’s brow, and she was happy to have the reassuring touch. She felt so lost, so lonely, with her mind scattered and her spirit filled with anger she could not rightly claim as her own, but how could she purge those who possessed her? Perhaps Rosalind could help but, in this weakened state, she wondered if it was too late for healing even under this wise woman’s skilled spells. Maybe death was all that was left to her. It was what she deserved.

“I spoke with the elders about your situation this morning.” Rosalind stood and walked to the small bedroom window. “I told them about Anna’s disappearance. But I didn’t tell them your ridiculous story. They are undecided on sending out a search party, since we are so close to winter storm season. I fear she is lost to us.”

Claire sat up in bed and tried to quell the betrayal she felt at Rosalind’s words. “I told you the truth last night. Anna is transformed. She will not be coming back.” She held off tears as her mother faced her. She noted disappointment pulled down the woman’s face in a weighty frown. “She deceived me. She took the spell and the blood I was to have and she became queen. She belongs to the Oak King and the forests now. She is no longer one of us.”

Rosalind bowed her head. She toyed with the hem of her apron. “Strange things have been happening in guild lands since Samhain eve. So, a part of me wants to believe you.” She looked up, tears spilling over her eyelids and down her cheeks. “But another part of me desperately wishes not to believe you, because I want my Anna back.” She moved swiftly across the room, sweeping the curtain aside as she went.

Before she could exit, Claire called to her. She ignored the stab of resentment that flooded her heartcore when the elder showed so much love for Anna. Claire felt it belittled her own fragile state.

The elder returned to the room with her hands clasped at her waist. It was as if she were weighing the pros and cons of divulging her information. Claire grew impatient as she waited. Finally, Rosalind came to sit at the end of the cot.

“One of the younger initiates did not return from the Samhain celebration,” she said. “We didn’t realize it until her guild mother reported it to the elders. The search party found her torn robe near the north east tree line, lying in a mound of disturbed earth. She’s still missing.” Rosalind paused. “Her guild mother went out again, three days past. She has not returned from her search. We are losing our witch women, and I have to wonder if it has something to do with the tainted seed that grows in your belly.”

Claire wrapped her arms protectively around her protruding stomach.