Archive for the ‘new adult’ Category

Species, the urban fantasy I wrote with K.H. Koehler, is now live at Kindle! This will be the last book I’ll write for a long time, so I hope you all enjoy it. Go snap up a copy now! Link and blurb below. Hope everyone had a great Halloween!

About: The world is weird. Leigh had no idea how much so until she gets attacked by a vampire-like… something. And now she’s one of them.

What’s worse, absolutely none of the usual rules apply. The Species, as they are called, operate in a shadowy underworld of gothic debauchery, secretly controlling almost every part of human society.

And then there’s Aidan… one of the most powerful, troubled, and beautiful of the Aristocrats. Leigh could fall hard for the guy, but then she uncovers a massive, global conspiracy by the Aristocrats to turn the human race into cattle and the other Subspecies into slaves.

There’s a civil war coming. And if Leigh and Aidan can’t stop it, then it’s the humans who will pay the ultimate price.

If you like action-packed urban fantasy, pulse-pounding paranormal romance, and an unforgettable adventure, then this novel is for you!

Leap into the world of magic and corruption. Get your copy of Species today!

Big thanks to everyone who has already grabbed a copy!

Our thanks goes out to Amy N Sperry for her review of Anti-Heroes the Complete Collection. Here’s what Amy had to say below:

“This collection is a fast and fun YA read. Main character Serena has transferred to a new school where everone is either tracked to become a hero or a supervillan. Her deceased mother has left her a supervillian legacy and giant witchy boots to fill. Can she embrace her legacy and find her own identity in a school that seems to turn everything into good vs evil…… only with the help of her outcast friends.”

You can grab Anti-Heroes now at Amazon, Omnilit, Nook, and Smashwords. Buy links are below the cover.

The Black Act Book 4: Witch Twins Rebellion is now available at Smashwords, Amazon, Kobo, and Barnes & Noble. Details, including an excerpt, and buy links are below. Don’t forget to grab Book 1: Witch Twins Born for free at all outlets, and Book 2: Witch Twins Secrets along with Book 3: Witch Twins Cursed are now available for under a dollar. Links to those are also included below. Since this story is centered around Samhain, it’s perfect Halloween reading material! 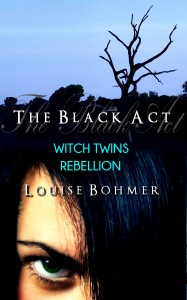 About: The history of a curse is filled with bloody battles, bitter hatred, and dark secrets.

In The Black Act Book 4: Witch Twins Rebellion the story of Glenna, a wise woman haunted by the ghosts of her family curse, unfolds and her connection to Anna and Claire is revealed, along with devastating truths for Claire and her lover Luthien.

Excerpt: “The altercation between my former self and Corrigan isn’t a secret,” the Oak King said. “Nor do we feel a need to spread it around and validate—honor—a negative time in our shared histories. While we do believe in learning from our mistakes, the fae don’t believe in glorifying them.”

Goddard snickered. He turned in a slow circle with his arms held out at his sides, palms up and hands held high.

“A curse,” he shouted to the gathered crowd. “A flimsy string of uttered words and an iron dagger through the heartcore. That was how my great ancestor put an end to your powerful Oak King. He turned the witch magics against you. Used your own sacred practices to shame you.”

The Oak King snorted. His face contorted into a wrinkled, ugly frown. “He raped a young witch girl’s body and mind. He took our spells and perverted them. Corrigan and his followers committed black acts. He endangered both our peoples’ well being. He deserved the death he received.”

The king watched her father for a moment then made his way back toward the table. She was about to turn away with the rest of the crowd when a shrill scream broke the renewed calm.

Anti-Heroes Makes Book of the Month!

K.H. Koehler and I are thrilled to find out Anti-Heroes The Complete Collection has been picked as book of the month by TMV Cafe! Big thanks going out to Mr. Gregory L. Hall (The Funky Werepig himself!), TMV Cafe, and I Smell Sheep for choosing us!

Thank you to everyone who has been downloading Anti-Heroes like crazy. And don’t forget there’s also a paperback now!