I’m a little late blogging this, but Superpow is now available from e-junkie, Smashwords, and Amazon, and it’s coming soon to BN and Apple! Details taken from the Superpow site below. And you can read an excerpt from my story in this fine anthology, Unsuper Translator, here.

Bang, crash, pow!–oh, but there’s so much more to the superpowered characters these Red Penny Papers alumni have created in Superpow. Our cover heroes come from two new pulptastic superhero novellas from Corinne Duyvis’s Pantheress, one of the rogue heroes of Sigma City, and William Vitka’s Ruben, trying to make a new life in a world where everyone has ‘funny’ powers… except for him. And these two are just the beginning of the villains, heroes, and observers waiting in the pages of Superpow. With a diverse cast of characters and a new spin on pulp fiction, his isn’t your mama’s superpowered storytime, either.

Superpow is the first and only fiction The Red Penny Papers has ever charged for. So apart from just being a gorgeous collection of superhero pulp short fiction and poetry, it’s a great way to help us a little around the house. All e-versions are $5.99, and all the money goes to the mag.
Buy your copy from…

Red Penny Papers will release Superpow Oct. 27, 2014, and they’ll also be celebrating the re-opening of RPP. I’m pleased to be a part of this fine anthology, which also includes authors like Fox Lee, Corinne Duyvis, and William Vitka. Superpow includes unconventional superheroes, and I’m sure you’ll enjoy the read. Below, I offer you a sneak peek at my Superpow short story, Unsuper Translator.

Many thanks to KV Taylor and everyone involved with Superpow for all their hard work. And congrats on the re-opening of RPP!

The underground parking garage now served as a dwelling for earth stragglers. When Roger emerged from it, he squinted against a washed grey sky until his eyes adjusted to the weak light. Did that snot-nosed Sector 4 prince have a hunter on his tail yet, he wondered, and how would the hasty punch to the prince’s face effect his job options? It wasn’t the first time he’d lost the Elites’ favor, but he was getting too old to play their games anymore.

He heard a metallic whir, and then a low level blast from a matter scrambler knocked him on his ass, stealing his breath and making his heartbeat erratic. A booted foot pressed into his back as he swallowed sand. Next came the melodic beep of a G9 Comtracker, and the distant purr of a patched through connection. Roger tried to squirm from beneath his captor, but the matter scrambler blast had temporarily paralyzed him.

“Yup, it’s him. Picking him up now,” a woman said. Someone on the other end squalled loudly in reply. “What? No way. Remember what happened last time I went through that town?” Silence from her. Screams from the speaker. “Fine, but it’ll cost you fifty more gold pieces.” A beep ended the caller’s caterwaul.

“Can you feel your legs yet?” she said to Roger. “We need to get moving.”

“You know, we could’ve done this face to face.” His words came out a dust-choked croak. “You didn’t even read me my rights. I call hunter brutality here.”

“Sorry,” she said, but she sounded less than sympathetic. “I’ve been contracting for those elite bastards too long.”

The boot left his back. His legs and feet tingled with the return of feeling, so he flipped over. A winged woman, her profile silhouetted by the sun, trained a matter scrambler on him while she offered a hand up.

She was about his height, and her features and sky blue skin indicated some Venush genes. A well-muscled woman who had no scalp, just a translucent dome, through which he could see the snaky pathways of her brain. Glimmering wings the color of dying sunlight jutted from her back; they were mechanical, which surprised him. Wings were usually a natural birth trait of any Venush/human hybrid.

She shook her head and squinted at him. “Roger Mantus, the great alien translator. Gotta admit, I never thought I’d be hunting you.” With the matter scrambler, she motioned for him to face forward and walk.

Roger shrugged. “Not the first time Sector 4 Elites have sent a hunter after me, or stripped me of my super hero status when I didn’t fulfill their agenda.” He looked over his shoulder, sneered at her. “Besides, if you had a conscience you’d let me go.”

“Look, I appreciate your motives, but it was still a stupid move.”

He spoke through clenched teeth: “All that snot-nosed sector prince had to do was answer the lady’s question. Then I wouldn’t have punched him. Where is she gonna get her medicine if that bastard closes the free clinics, eh? You know those private hospitals charge an arm and a leg–sometimes literally.” 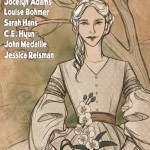 I just added a new section to the site: Here you’ll find free reads from Louise and her friends. Tasty digital treats for your eyes and mind. Check out Parlee Road from Louise, and The Clockwork Companion from K.H. Koehler. Check back often for new free reads. 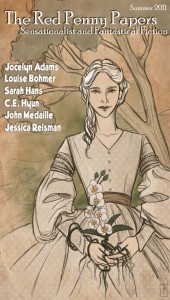 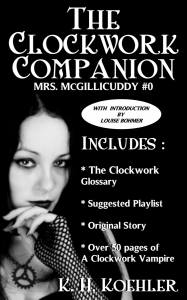 My story ‘Parlee Road’ is now live in The Red Penny Papers, an ezine of sensational and fantastical fiction run by KV Taylor, along with John Cash and Mark Deniz. You can read Parlee Road here, and be sure to check out all the great fiction in prior issues and in serial form.

Fae Awareness Month – Peering Into the Fickle Eye of Fae

Did you know June is Fae Awareness Month? You can keep up with all the faerie information, book and movie reviews, faerie essays, and more at the Fae Awareness Month site. While there, faerie lovers should leave a note of thanks to KV Taylor, Mark Deniz, and Sam Kelly for bringing them a whole month of faerie goodness (and badness too–this is faerie).