Archive for May 2013 | Monthly archive page

Shut the Book on Child Abuse

posted by LBohmer | on activism, nonprofit |

Fellow writer Heather Wildman recently asked if I’d like to donate some books to this cause, and since I personally think it’s a very worthy one, and being a survivor myself, I’m spreading the word. The auction isn’t until July, but please browse the sites and bookmark. Here’s some info taken from the Shut the Book on Child Abuse site and Children Without a Voice.

This is a silent auction that will take place between July 15 – 20, and winners will be announced July 22. The purpose is to raise money to donate to one local and one national nonprofit organization focused on prevention, education, and advocacy against child abuse. (taken from the site)

Please visit HERE for full details on the auction. I’ll be donating two signed books–Detrius and Old School–and I’ll post a reminder about the auction in late June.

Please also visit Sunflower House, the local non-profit the auction proceeds will be donated to, as well as Children Without a Voice.

If you haven’t been by the Anti-Heroes website for the new cover sneak peek and our latest updates, you should get on over there! Hope May has been treating everyone great. I’ve been busy editing and writing (some I’m not telling you about cause I’m a secret agent woman like that). My mom-in-law got a new puppy after our sweet Kali girl passed on a while back. So Abigail, the new dog, has been keeping us busy, also. She’s the color of a Werther’s candy, so I nicknamed her Abigail Werthers. Cause I’m silly like that. I need to post some pics, I know.

Anyway, on with the cover goodness from Ms. K.H. Koehler! 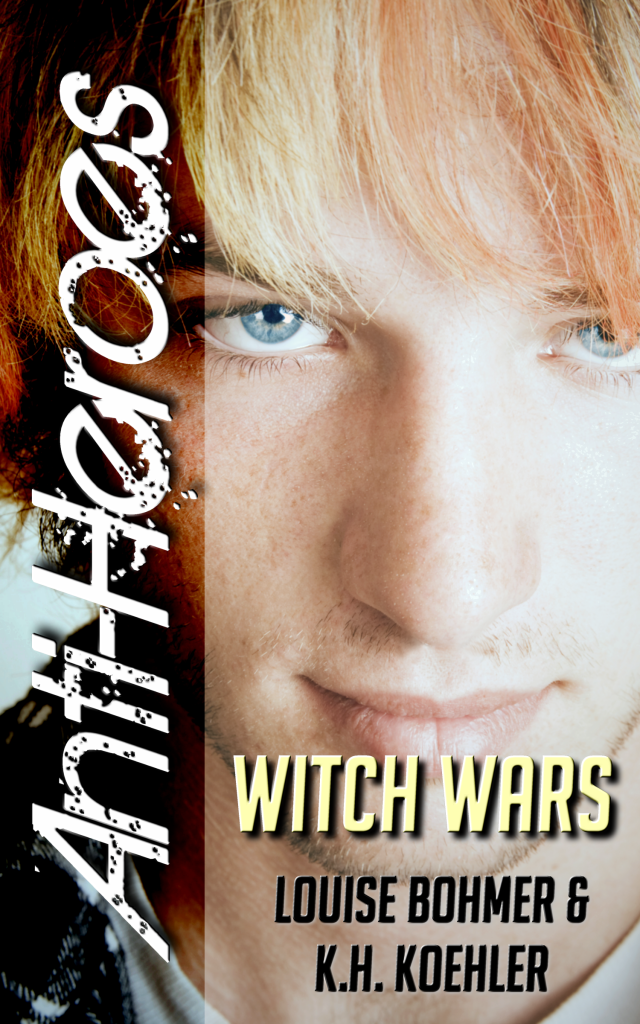 Witch Wars (Anti-Heroes Book 6) will wrap everything up and keep you zipping through the pages to see what happens to the Geek Squad. We’ll also post a sneak peek at the final collection cover soon, so keep checking the Anti-Heroes site and our sites for more updates!

Be sure to grab all the books in the serial! New Girl (Anti-Heroes Book 1) is free, so you can try out Anti-Heroes before you buy.

About: In Anti-Heroes Book V: Magic Man, the Geek Squad learn some shocking and hard truths, Jinx and Serena grow closer, Nikki finds romance, and the Supervillains face their greatest battle of all with Serena’s uncle!

Excerpt: Serena counted thirty or forty winged gargoyle specks on the horizon before finally giving up and swearing under her breath. They were a huge, nasty looking lot, and something told her she and her friends were in for a bad time of it this sunny afternoon.

“Holy shit,” Jinx said, coming abreast of her and pushing back the hood of his hoodie. “Are those what I think they are?”

“No, they’re a flock of seagulls. What do you think, genius?” Isaac said, slapping Jinx on the shoulder and nearly crumbling the smaller boy to the ground.

“Um…” Nikki had finally joined them, and she was pointing off to the far end of the fairgrounds where the screeching gargoyles were skimming lower and reaching for a group of kids from their school who were standing by the funnel cake vendor. The moment the kids spotted the threat, they dropped their treats and stampeded away in a panic. One of the gargoyles tilted his wings and snatched at a longhaired girl who had lagged behind her group. She immediately started screaming and dropped to the ground, cold, grey, and as motionless as a statue.

“Did I just see what I think I saw?” Isaac said, his eyes wide.

Serena thought back to her date with Harrison, when the two of them had first encountered the gargoyles. She remembered how they’d touched people and turned them to stone right before her eyes. She’d used her Grey Magic to battle them and Harrison had used his powers to help her fight them off. But now wasn’t the time to mention that to her friends. Now was the time for quick action. “I think the question is, what are we going to do about it?”

“Serena’s right,” Nikki said. “The Supers aren’t here to help anyone. We’re all these kids have got.” She dropped the red pleather jacket she wore. Under it she wore her favorite black mini, thigh-high stockings and knee-high combat boots. With a determined glance their way, she started to transform. Seconds later her eyes had reddened and her skin had turned a glossy ebony color, though her hair remained the same white-blonde cornsilk, a flaming pale contrast to the rest of her. Her wings shushed forth like two black sails, and the new creature, a combination of Nikki and Nix, said in a lilting, snake-like voice, “Let’s show those creeps what we can really do!”

With that, she rocketed off toward the opposite end of the fairgrounds.

Serena turned to Jinx with a brave smile. “Let’s do it.”

Jinx gave her an arch look. “Go rescue a bunch of kids we don’t know who hate our guts and will probably blame us for this too?”

He grinned, suddenly looking very handsome and dashing, and shed his own hoodie so he could stretch his wings and shoot off into the air. The earthbound Isaac and Serena exchanged a nod and a smile and raced off toward the crowd of frightened kids.

While Jinx and Nikki met the hoard of gargoyles head-on in mid-air, Serena concentrated on racing to the nearest cluster of kids. Already a number of them had fallen to the ground and lay there like chiseled statues. She stared at them in horror, wondering if they were dead or just in some kind of suspended animation. She feared the former rather than the latter.

As soon as she was among the survivors, she stopped and raised her hands, calling on the Grey to form an impenetrable shield even as four gargoyles descended on her all at once, their claws reaching for her, toothy mouths gaping in hellish screams.

“No!” she cried and pushed out at them. The shield went from a dull, gunmetal grey to bright white. When the gargoyles hit it, they immediately bounced back, but Serena quickly learned that she could step outside her own shield. She looked in at the kids huddled together under the umbrella of her power and said, “Stay there! I promise you’ll be safe!”

She quickly raced to the next cluster of kids, who were under siege by no less than seven ugly gargoyles. The brutes were being held off by no more than Isaac’s quick thrusts as he punched at them to keep them away.

“Lemme give you a hand, big guy,” she said as she weaved another glistening dome of light over the small group of screaming kids.

Stick with our young adult series, because our next book, Book 6: Witch Wars, will wrap everything up, and rock your world (literally!). And keep checking the site for sneak peeks at the covers for Book 6 and the complete collection!

Thanks again for all the sales and support, folks. We’re thrilled you keep coming back for more adventures with the Geek Squad.