About: In ANTI-HEROES BOOK II: BAD BOY Jinx confronts his dad, Nikki is wounded in battle, Serena is called upon to control and utilize her Grey magic, and Isaac makes a difficult life decision. The kids learn very quickly that it isn’t easy being Geek…

Excerpt: Jinx and Isaac let out a cry as the pillar of darkness and the black, batlike figure of Nix collided in midair.

“Don’t I know it.” From the first day they had met in kindergarten, Jinx had known that Nikki was powerful. Nix was ten times as powerful as Nikki, and she didn’t have Nikki’s sense of fair play.

The darkness that was Satan shuddered even as Nix swirled through and around it like a black meteor, leaving a trail of her own murky darkness in her wake, wracking the branches nearby and sending down swirls of autumn leaves. As Nix reached the top of the pillar, where two bright, ruby-red eyes stared maliciously out at the world, a giant, almost formless hand snapped outward, grabbing her throat and halting her in mid-air.

“You’re impressive, little vampire,” Jinx’s dad said in a smoky, gravelly voice. “But not that impressive. You still have much to learn.”

He flung her away. Nix sailed end over end and collided with a nearby tree. Her wings tangled in the upper branches, sending down an even bigger pile of leaves.

By that time, the people in the mall parking lot had noticed the battle and had started racing in their direction, and Jinx, cringing in the bushes beside Isaac, wondered about human nature. Weren’t people supposed to run away from danger, not toward it? Yet the citizens of Sky City stubbornly began clustering together, alone, in pairs, even families with children, just to watch the angry swirl of darkness rising above the parking lot. It was no wonder to him that there were so many crimes in Sky City; the people here were too stupid to live.

Soon a few small dots appeared in the sky. Jinx recognized these as The Alliance, the coalition of Supers that watched over Sky City. He immediately picked out the white streak that indicated that Supernova was on his way, or the new Supernova, anyway—the original having died during the Battle of Two Moons. Behind him appeared his sidekick, The Rocket, and farther out the all-terrain Sky Vehicle that was ushering the non-flying Atlas and The Earthmover to the scene of the battle.

“I think it would be best to get out of here,” Jinx suggested, staring at the angry, roiling cloud that was his dad as he turned his attention on The Alliance. “Those stupid Supers will be here any second, and you just know they’re gonna blame us for this.”

Isaac straightened up. “Well, technically, it is our fault,” he said as he went to the tree where Nix, now Nikki, was tangled up. He gave it a shake, but although Nikki squeaked in surprise, it didn’t dislodge her, so Isaac grabbed the base of the tree and started to uproot it slowly, inch by inch.

Jinx watched, fairly impressed by Isaac’s show of strength. “It’s not our fault those chuckleheads blame us for this shit. It’s not like I asked to be the son of Satan, or you wanted your dad to do to you…what he did to you.” He knew how sensitive his friend was about that and chose not to elaborate.

Isaac gave Jinx a poignant look as he pulled the tree out of the ground as easily as a child pulling a candle off a birthday cake. Nikki screamed as he lowered the tree so his sister could untangle her hair. “Look, man, you know I’d go anywhere with you, Nikki too, but you can’t let your old man keep pushing you around like this.”

Jinx glared back. “Says the kid who won’t try out for hockey because his dad would pitch a fit.”

“This isn’t the same thing.” Isaac pointed toward the darkness, which was kicking up quite a wind.

Leaves and loose branches swirled past them and caught in their hair. Satan, having realized The Alliance was on their way, was making quite a show. The shoppers gathered in the parking lot, finally realizing there was a real danger involved, had begun backing up, though not quickly enough. Satan was growing larger by the moment and Jinx realized that his dad was on a roll, shaking his fist at The Alliance as Supernova, in full Nephilim form and looking especially angelic, descended to do battle with his archenemy.

He watched the other members of The Alliance descending, ready to mix it up with their old enemy. “Fine. You look after Nikki. I’ll take care of this.” He glanced up once at the roiling darkness looming over them, then turned and dived straight into it.

Jinx stood in the eye of the storm and stared down at his feet where a handgun—he was pretty sure it was a high-powered magnum—was lying on the pavement. He grabbed up the gun and checked it for ammo. Yep, it was a .44, so big he could feel the strain in his wrists when he hefted its weight. “You’re my son, Jinx. I just want what’s best for you,” came his dad’s needling voice in his head. He didn’t have to include the implied threat—that he was going to level the city until Jinx made him proud.

“Yeah, Dad. You and everyone else,” he said and tucked it inside the waistband of his jeans, pulled his hoodie down over the bulge, and headed for the convenience store across the street, leaving Satan to do battle with The Alliance and create a distraction for him.

Inside the store, the single, remaining patron was hovering by the door, peeking out at the ensuing battle in the parking lot of the mall, and the clerk stood behind the counter at the back. She was a girl his age, though one he didn’t know. She was paging through a battered copy of Sixteen and talking on her cell phone, punctuating her sentences with noncommittal “uh-huhs,” and “Yeah, looks like the city’s gonna get busted up again…what’s that?…nah, it’s The Alliance against some big, dark smoke monster. Can’t say if it’s from hell or another planet. Hey, maybe it’s from the hell of another planet? That would be different…”

Jinx kept his head down, his hood up, and feigned interest in the candy aisle as he slowly migrated toward the counter. His heart was running like a clock in his chest and his palms were sweating so badly he had to keep wiping them on the outside of his hoodie. The girl gave him a bored look as he approached, clearly unimpressed with his appearance. He really couldn’t blame her. After all, it was hard to compete with the show outside, Satan clashing with The Alliance.

“Gotta go,” the clerk said. “Some burnout with bad hair wants to check out. But I’ll call you right back.” She hung up and gave him an annoyed look.

The comment rankled Jinx. Girls like this one were always making comments like that at school, like he was less than them, like he was less than everyone, and the sudden spurt of anger helped him straighten up and eye the girl menacingly. “You shouldn’t say things like that,” he told her, trying to make his voice as gravelly and as deep as his dad’s.

“Sure, no problem,” she said, checking her text messages.

“And you should look at me when I’m talking to you.”

She finally graced him with her attention. “And you are?”

“Is that like a gang? You don’t look black.”

Jinx snorted. “I’m not a black man. I’m a black angel.” He thought about unzipping his hoodie and showing off his wings, but he didn’t show anyone those. The day he went to school for the first time, his mom had drunkenly taped them down and warned him to never, ever tell anyone about them, or else they’d put him in a circus.

She looked him up and down like she was having a hard time believing that.

“My dad’s Satan,” Jinx said. “He’s outside, fighting The Alliance.”

*Coming Soon to Kobo and Nook. The book is currently processing. We’ll update readers as soon as it goes live at these outlets.

It’s not easy being Geek… 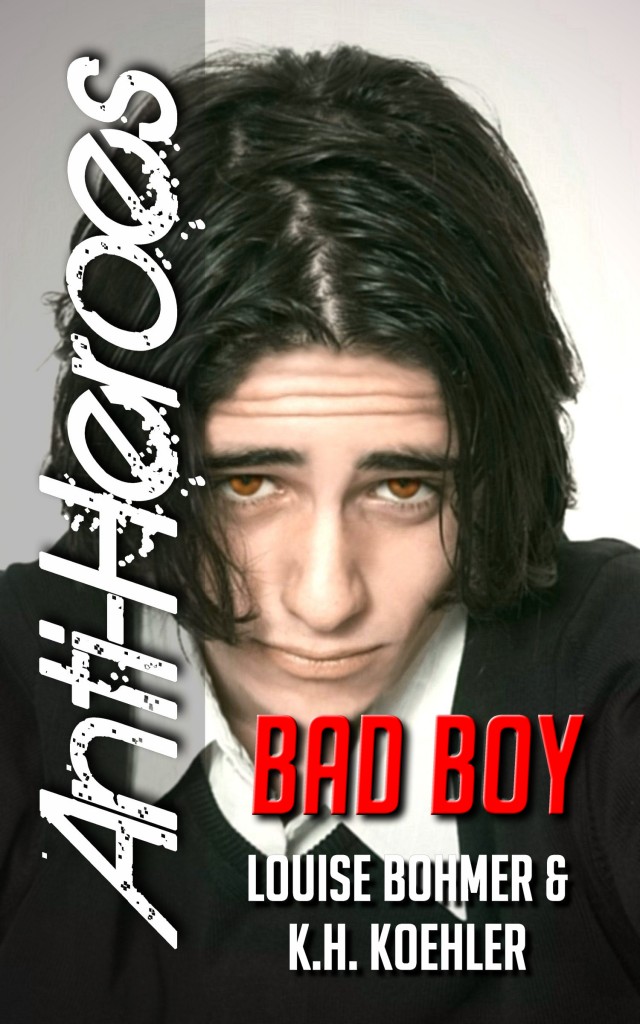 In the next episode of our ongoing serial, Jinx confronts his dad, Nikki is wounded in battle, Serena is called upon to control and utilize her Grey magic, and Isaac makes a difficult life decision. Meanwhile, the investigation into the death of Blaze, once a great member of the Alliance, is ongoing. Could Jinx be responsible, like everyone seems to think?

Don’t forget to grab Anti-Heroes Book I: New Girl. See what happens on Serena’s first day of school at Sky City High. It isn’t easy being the daughter of The Night Witch.

For the Nook Folks: New Girl (Anti-Heroes Book I)

New Girl (Anti-Heroes Book I) is now available on Nook! Why not surf over and pick yourself up a copy? Perfect fall reading! Click the link above, below, or the book cover to purchase the ebook.